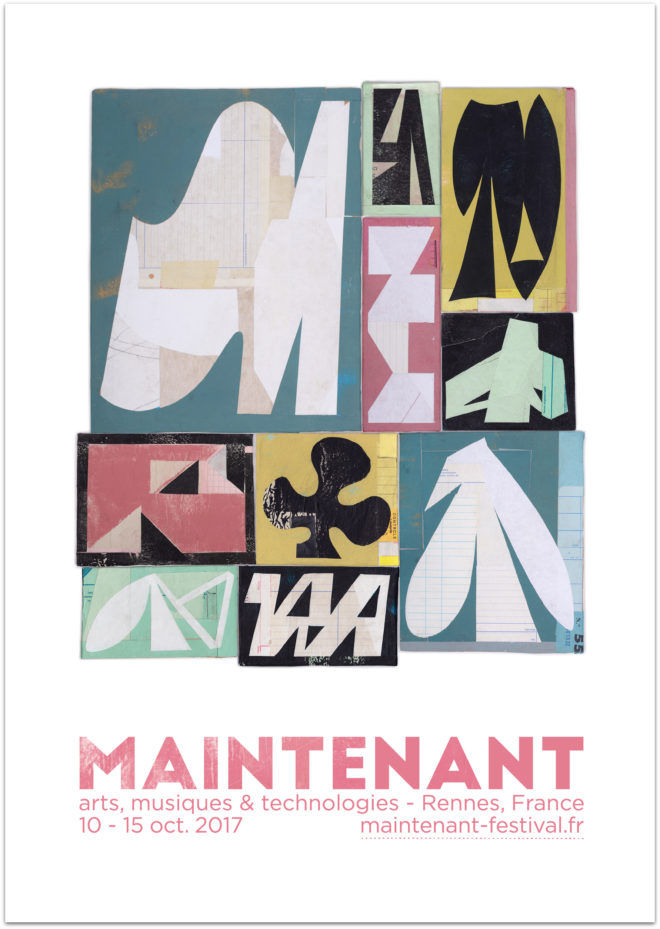 Alter1fo : How did you first get into graffiti (a long time ago…) and illustration ?

Erosie : As a kid I was drawing a lot and was very interested in seeing the early graffiti in the mid eighties, characters, colors, bold shapes, it was very exciting. Later I started doing it myself in 1993 and that lead me to going to art school a bit later in the mid nineties, starting my professional illustration career after graduation.

Alter1fo : It seems that you are trying to connect seemingly segregated areas (graffiti, conceptual art, illustration and typography, among others), incorporating this broad range of influences, all this background, in your work. You said that you don’t like to to be pinned down into genres too much (like a ‘genrephobia’ as you call it). In which way do you think connexions between all of these fields feed your work ?

Erosie : Well I think this « genrephobia » was more of a reaction to the early street art hype around 2005, I felt the labeling was the end of an open experiment, of doing things in the street that were not graffiti, not design, not art, but somewhere in between…I like to skip between influences, mix different approaches to try and see where they will lead me. There is so much to discover.

Alter1fo : You said that in 2008-2009, you did this « perfect circle » with a spray can and that was the end of graffiti for you, because everything was into this circle. But in the other hand, it gave you a new direction for your work. Can you explain it to us a little bit more ?

Erosie : I think it was the conceptual approach of doing a circle, linking the graffiti approach to an art historical theme; from the renaissance artist Giotto to Rembrandt to zen calligraphy, the circle has always been a fascinating metaphorical form. For me the power was in the realization that a simple , well executed gesture can have a big impact, like a graffiti tag but with a very different context. I wanted this approach as a guideline in my work; more intuitive than the circle, but the direct satisfaction of a gesture was soemthig I was looking for in collages, painting and drawing.

Alter1fo : You like elements of surprise in the process of creation. You said that you are trying to work thinking about concepts, about the direction but that  the way to reach the final image has to merge from an organic process, changing all the time. Can you explain it to us ? What about this kind of friction between plans and kind of improvisation ?

Erosie : The work i do nowadays comes from my sketchbook pages; a grid filled with intuitive, reactionary shapes and forms, like letters but without the legibility. The forms are created by altering them slightly every step, so in 5 steps for instance there is a very different outcome that I could not have perceived otherwise. This is what I like. 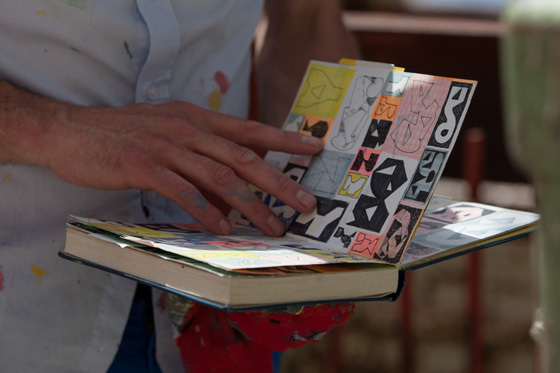 Alter1fo : You run a record label with Martyn called 3024 in which you do the graphics. Electronic music is often made with  loops, layers of sounds. In your projects, you are working with a lot of layers too. How do you think music inspires your work ?

Erosie : In various ways, both direct and indirect…I realized at one point while observing Martyn in a dj set that the reactionary approach of selecting music is such an interesting one; there is a certain amount of records, there might be a plan, but the end result is open; the reaction of the crowd, the sudden need to change the build up, I always though how nice it would be to translate this approach visually. 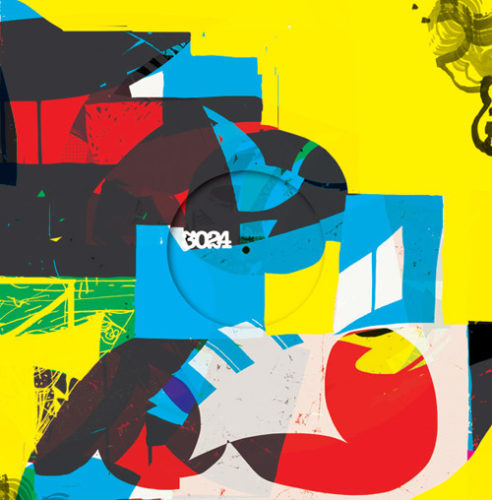 Alter1fo : In public spaces, graffitis are rarely permanent, freezed. They are constantly partially or totally covered up, transformed. Time is always changing them. Your artist name, Erosie (erosion in dutch), is maybe a way to recall this process. Is the way you are working (with a lot of steps, of layers) another way to recall the importance of time ?

Erosie : Not so deliberately, but in a way it’s related. It comes from the idea of a city and how it absorbs or rejects the graffiti in it; how it’s cleaned and repainted, this constant process. Now it changed a bit but there is still this connection I guess..

Alter1fo :  You use different techniques (collage, spray cans, paints… ) that you mix together, in different layers. These layers seem to hide and in the same time to reveal some steps of the creative process, the « geology of your work ». Is that something that you want ?

Erosie : It’s the iterative process that attracts me, but in different ways of execution; with painting and collage the reactionary process is much more leveled; like stacking different forms on top of each other, with my recent murals and drawings the process became more linear; the reactionary factor is placed next to one another.

Alter1fo :  In french, Maintenant means Now. I think it ‘s a beautiful echo to the way your work includes « the moment » in the creative process. You ‘ve done the visual identity for Maintenant. What did you want to do with this project ?
Erosie : Yes that makes sense, i think most of that idea came from the people of Maintenant though that saw this approach reflected in my work ( mostly based on the album cover of Martyn and Steffi’s  « Evidence from a good source« LP) 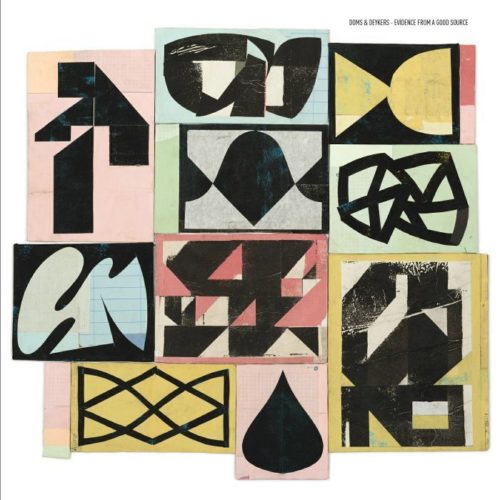 Evidence from a good source

Alter1fo : The visual identity you did for Maintenant seems to be based on the process of working with shapes that come from letters forms, as in your previous work Linguaggio Universale in Piano Casa in Italia that you realised in 2015 (maybe i’m wrong). You said that you have been developping a series for several years about the interpretation of language, where the letters you draw appears as silhouettes. Can you explain this project ?

Erosie : The « universal language » walls are somewhat an approach to create an associative work without being too directing; I think it’s important to realise the work is public; many people will see it, it will became part of a building, street and city, become part of many different lives. It’s abstract but because of the colours and diversity it’s very open to interpretation. In Italy it was great to experience how well it was received by the people that actually lived in these buildings, a double bonus. 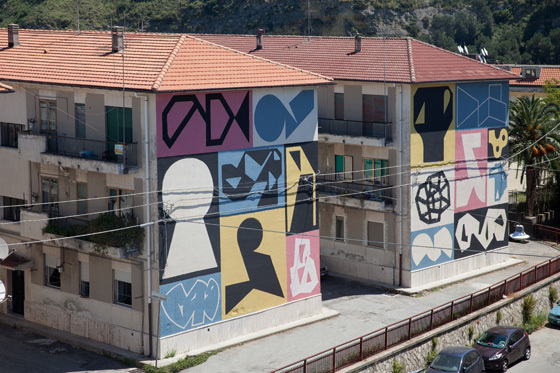 Alter1fo : Looking at this visual identity for Maintenant, Matisse and his « papiers découpés » came immediatly to mind. Is that something you had in mind ?

Erosie : I guess it comes from this one organic leaf-like shape, but sure, it’s a great influence but not a direct one since i think the forms are more based on letter shapes and architectonic details among others.

Alter1fo : Did Maintenant offered you a « carte blanche » for this visual identity ? Or did they have some requests ?

Erosie : They really liked the collage approach, but for the rest there were no limitations.

Alter1fo : What kind of tools, techniques, materials did you use for this visual identity ? In which way those have influenced your work ?

Erosie : I started from the idea to base the image on the 10 letters of the word « maintenant » so in that way directly linking the shapes to the letter forms, although some shapes turned out very differently. It wasn’t meant to be legible, but more as a suggestion, reflecting a certain ambivalence that could be the association with what the festival stands for.

Alter1fo : Last question : what are your next projects ?

Erosie : I will have a solo exhibition in Amsterdam at Mini gallery in October and i am working on a mural in Berlin at the moment,  also will be working on more prints and a publication of work, a lot of stuff to do !